The Laboratoire d’Informatique, de Robotique et de Microélectronique de Montpellier (Laboratory of Computer Science, Robotics and Microelectronics of Montpellier) is a major multi-disciplinary French research center located in the South of France. It is affiliated with the University of Montpellier and the French National Center for Scientific Research (Centre National de la Recherche Scientifique, CNRS).

It conducts research in Computer Science, Microelectronics and Robotics and is organized along 3 departments comprising 19 international research teams assisted by central services personnel.

LIRMM was created in 1992, the result of the merger of the CRIM and LAM laboratories, under the leadership of the CNRS (French National Center for Research) and the University of Montpellier II. The project’s intent was to promote information science and technology within an integrated research unit. At the time, this type of research organization was unique in France. Initially organized in four research departments (Knowledge Acquisition and Representation, Theoretical and Applied Computer Science, Microelectronics, and Robotics), this laboratory subsequently combined its two Computer Science departments into one and added research teams in 2002. It also developed a long-term partnership with INRIA, another prestigious French research unit. In the last decade, several new teams have been added or have joined the Lab. 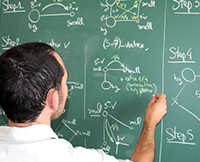 The research activities of the Robotics department focus on medical and parallel robotics (DEXTER team), perception and underwater exploration robotics (EXPLORE and ICAR teams) as well as human-robot physical interaction and humanoid robotics (IDH team). These activities are notably applied to manufacturing industry, healthcare, environment and human in his daily environment.

LIRMM’s research finds applications in a vast and diverse range of domains, such as biology, chemistry, telecommunications, healthcare, the environment, etc., but also in our own fields of expertise – Computer Science, Electronics and Automation. Our overall mission is therefore to:
We use cookies to ensure that we give you the best experience on our website. We do not call on third party commercial services therefore third party cookies are NOT used.
Nous utilisons des traceurs nécessaires au bon fonctionnement du site , cependant nous n'utilisons PAS de traceurs publicitaires. Ok