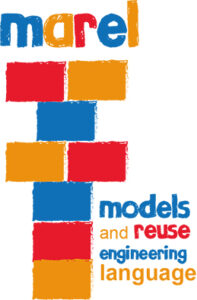 The work of the MaREL team is part of the software engineering framework and focuses on the automation of the several steps of the software lifecycle, from design to maintenance through the compilation and optimization of the code, the modularization and reuse of programs, as well as their semantics and dependabilty. These topics cover the entire approach, from theoretical studies to full-scale experiments, including the development of languages, models, algorithms and demonstrators.

The activities of the MaREL team focus on two research themes :

The team also has a number of transverse activities concerning the development of formalisms and methodologies whose scope of application goes beyond the field of software engineering (formal concept analysis and automated proof).

These three axes are at the same time well identified and tightly related. The concepts of “object” and “model” provide a common base, and components are studied from different points of view: programming languages, models, and their extraction from code. RCA is an object of study, in addition to being a formal basis for tool development.